Concorde has a tricycle landing gear layout, with a nose gear and 2 main gear. Separate from this configuration is a tail bumper gear that is fitted to prevent any damage to the fuselage and engine nacelles, should the aircraft suffer too high a rotation angle during take off or landing.

Concorde's landing gear differs from those on other aircraft for several reasons: The nose gear is situated behind the flight deck, making taxing different to a normal aircraft and it also retracts forwards. The Main gears shorten during the retraction process, otherwise they would be too long to fit into the bays. Both the main and nose gears are fitted with spray guards that prevent water being flung up and into the engine intakes.

Normal operation of Concorde's landing gear is achieved though electronic control, which is signalled to the green hydraulic system by operation of the 3 position landing gear lever. When in Neutral the electrical and hydraulic control of the gear is removed and it is help in place (either up or down) by its locks.
A spring loaded guard is fitted to prevent inadvertant gear down selection. A Gear O/Ride button is available to mechanically disengage the safety baulk that stops accidental operation of the gear handle. The zig zag pattern shows that it is in operation.

There are 4 movements that can be made on the gear lever:

1 Neutral To UP - Normally the gear would be in the locked down position, so moving the lever in this direction would apply electrical power and hydraulics and raise the gear through process that is found later on in this section.

2 Up to Neutral - After the gear is up and locked the lever is moved back to the neutral position. This removed power from the gear and leaves the door actuator jacks only pressurised on the up side

3 Neutral to Down - From the gear and doors being locked up, electrical and hydraulics are connected and the gear is lowered using the procedure that is again detailed later on.

4. Down to Neutral - with the gear locked down and the primary doors are re-closed, electrical and hydraulic power is once again removed from the system. 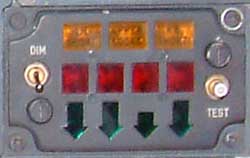 The landing gear normal annunciator panel has 3 levels of lights

The top YELLOW row signifies the 3 locks that are either released or closed during the process of landing gear operation. The shortening locks (LH SHORT / RH SHORT) on the main gears when they lengthen and lock down along with the upper locks to lock the main and front gear in place in the landing gear bays.

The RED centre row indicates the gear doors are open or that the tail gear is in motion.

The bottom GREEN row are the standard "Down and Locked" indicators from from left to right the Left Main, Nose, Tail and Right Main gears. 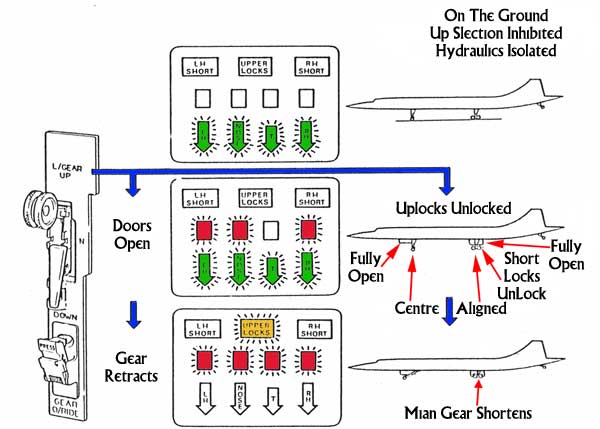 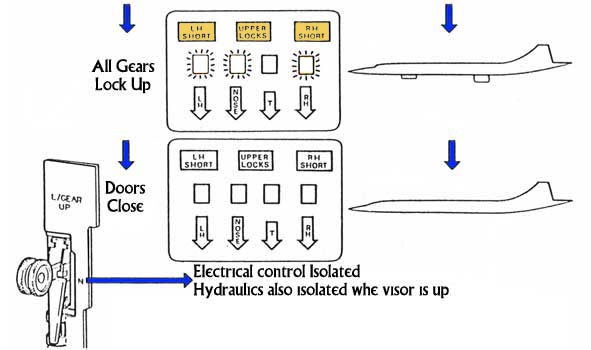 When the left shock absorber becomes uncompressed at take off this allows the system to operate when the gear lever is moved to the up position.

The Primary Doors unlock and open
The system logic confirms that : Hydraulic power is applied to the main landing gear shortening locks
Hydraulic power is applied to the landing gear actuating cylinder
The system gets confirmation that the gear has fully retraced and the uplocks have engaged
Doors close and lock
Gear selector is moved to Neutral
Electrical power is removed
Hydraulics are isolated when the visor is locked up

An additional indicator panel was fitted to BA aircraft on the Flight Engineers panel to show retraction faults. 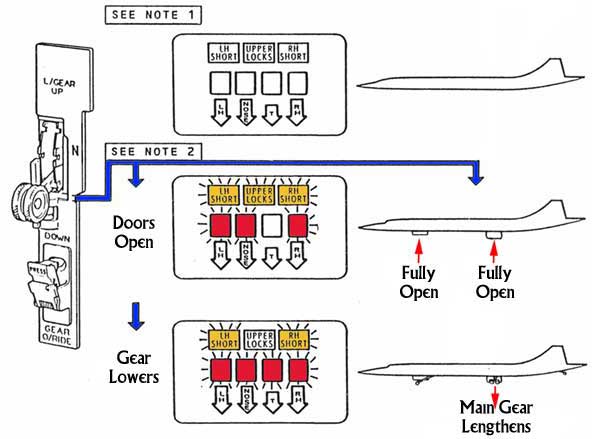 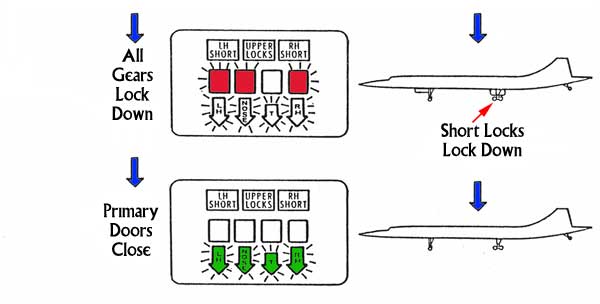