The Concorde 'B' model, although never put into production, was first discussed only 4 months after the start of scheduled services in 1976.

At that date Jacques Mitterrand, Chairman and Managing Director of Aerospatiale, submitted to Mr. Cavaille, French Secretary of State to Transport, a proposal to investigate an improved version of Concorde - the "Version B". A similar letter was sent to the British government.

The letter he sent elaborated on the quality of the work carried out and the know-how that had been acquired by the four French and British engineering companies (Aerospatiale, BAe, Rolls Royce and SNECMA). He also stressed the importance of the role that the manufacturers of Concorde could have in the development of a second-generation supersonic aircraft, that would be foreseeable in the 1990's, probably in the form of a collaboration between Europe and the United States.

The letter also gave the official go ahead to an exploratory study (which actually was already underway) on upgrading the capabilities of the current Concorde design in the early 80's, and proposed a feasibility study on this topic.

This study had a double aim:

The suggested feasibility study, with a cost estimated at 9 million French francs, was to last 9 months and to comprise three areas:

If this study confirmed an economic interest for the manufacturers, and led to the decision of the launch of an improved version of Concorde, such an improved version (allowing for a 5 year development programme) could be ready by spring 1982 for the 17th production Concorde.

The history of civil aviation shows that almost all new aircraft constituted a base point for the start of improved versions (e.g., the Boeing 747-100 evolved into today's 747-400).

The interest in this development process would have been beneficial to both the airlines and the manufacturers:

These considerations should have applied particularly to the case of Concorde, considering the exceptional degree of innovation obtained and the great amount of technical knowledge accumulated during the twelve years of development of the initial production version.

The broad objectives of the B version were to ensure the expansion of the network of routes that supersonic aircraft could use.

The following improvements were considered to be necessary:

Reduction of the harmful acoustic effect on the airport environment:

Although the level of noise produced by Concorde at takeoff and landing is equivalent to that of the first generation long haul aircraft in service (B 707, DC8), only the second generation of long haul aircraft (B747, DC10, L1011) equipped with high-bypass jet engines satisfied the new international noise rules. With the reaction of the United States, which had at the start of scheduled Concorde services not accepted the use of Concorde on their territory, it would be important to reduce the level of noise generated by the aircraft.

Increase in the operating range

The operating range of the initial version - primarily designed for the connection Paris London-New York - was to be increased to allow connections of the type:
Other European capital cities - East Coast of the US in one sector.
United States - Japan in two sectors.
Europe - Australia in three sectors.

Reduction of the fuel consumption

Concorde's fuel consumption accounts for a third of the direct operating cost (DOC). A reduction in fuel consumption would mean an improvement in economics for the airlines using the aircraft, making it even more marketable by the manufacturers, and also enable the airlines to reduce ticket prices.

The objective of noise reduction implies an increase in the smoothness of flight during takeoff and landing, which also results in an improvement in all subsonic flight modes (climb, subsonic cruise, approach). This would also help in the above objective of increasing the operating range. This modification must respect two constraints: to preserve - if not improve - the supersonic smoothness of flight, and to limit the effects from modifications or additions on the central core structure of the wing, in order to re-use the majority of the tooling currently used in manufacture and assembly.

A moderate increase in the range could be obtained by aerodynamic tweaks to the current design. These included lengthening the wing tips and mounting droop slats on the leading edges of the wings. These tweaks would reduce the induced drag at supersonic speeds and increase the available lift at slower speeds. 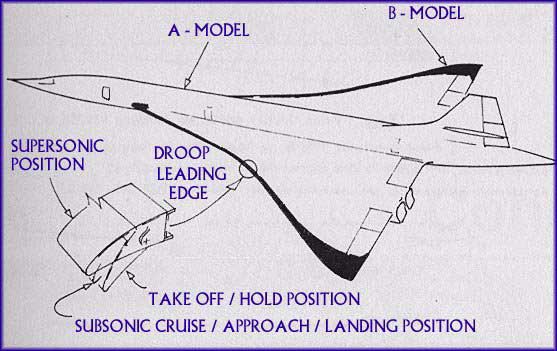 The additional lift generated by the leading edge droops would permit the aircraft the fly at a lower angle of attack at slower speeds, therefore requiring less power to be generated by the powerplant, which in turn would reduce noise and increase fuel efficiency.

Optimisation of twist and camber of the wing, combined with the increase in the lift coefficient (Cz) along with the increased thrust offered by the supersonic engine also allows improvements of the smoothness of flight at Mach 2.

Detailed aerodynamic improvements, (reshaped trailing edge of the control surfaces and thinning of the lower lips of air intake) which were later applied to the current production models before they entered service, were also proposed to be continued on the Concorde 'B'.

Modifications of the propulsion unit

The majority of the noise produced by Concorde on takeoff and landing comes from the area of strong aerodynamic shearing located at the edge of the exhaust. The engine, which is optimised for supersonic cruise rather than subsonic flight would be modified so that gains could be made throughout the whole speed range and specifically gains could be made in fuel consumption in the transonic region, thus giving an increase in the operating range required.

Physically, the modification consists of replacing the low-pressure compressor by a compressor with increased diameter and the low pressure turbine assembly by a two-stage turbine. The installation of a discharge system to increase the margin of air flow through the engine would result in an increase in air flow which reaches 25 % on takeoff and 35 % during approach. The thrust gains obtained at takeoff and at transonic speeds also make it possible to remove the reheat (afterburner) system with its very heavy fuel consumption and significant addition to the noise generated by the powerplant.

To lessen the jet noise on takeoff and approach, another improvement is made by installing acoustic processing in the air intake and the ejector. The gains of air flow and specific fuel consumptions obtained are summarized in the next table

Modifications of the fuel tanks

The increase of capacity obtained by the enlarging of the external wing and the tank at the front of the wing is supplemented by the addition of a fuselage tank connected to the latter. The drawing shows the modified tanks and additional tank areas

Changes would have been incorporated in the autopilot system for the takeoff and approach stages, in order to automatically optimise the aircraft in these key stages of flight and to reduce the noise levels around the airports during takeoff and landing.

The additional wing area along with the modifications to the engines and intakes would add to the empty weight of the aircraft:

The reductions would have been obtained mainly by the use of carbon fibre in the construction of control surfaces, service doors, etc.

The increase in the empty weight and the fuel carrying capability also requires an increase in the various performance characteristics (a payload of 24,800lbs/11260kg is used):

As the manufacturers were having great difficulty in selling the 5 remaining Concordes at the end of the initial production run of 16 aircraft, the B spec modifications that would have been applied from production aircraft number 17 onwards never materialised. If the additional range and performance had been available many more airlines might have purchased Concorde and air travel as we know it today might have been completely different.

Over the years, since the introduction of Concorde by the airlines, small changes to the aerodynamics of the original model's specs along with operational improvements have enabled the range of the aircraft to be increased to near 4,500 miles. It regularly flies the 4,250 mile trip to Barbados from London with a maximum takeoff weight that is now very close to the figure estimated for the B model. The load carried is only 80 passengers, but this is because with Barbados being a holiday destination the passengers prefer to carry more luggage ... and pay that little bit extra!

If the B model had been built, the range of Concorde today could have been pushing 5000 miles, as well as benefiting from the increased subsonic performance and reduced noise emissions.

The technical knowledge acquired with Concorde without doubt contributed enormously to the commercial success of the European Airbus family and their derived versions, putting an end to the American monopoly in this area that had been present in civil aviation since the 1960's.